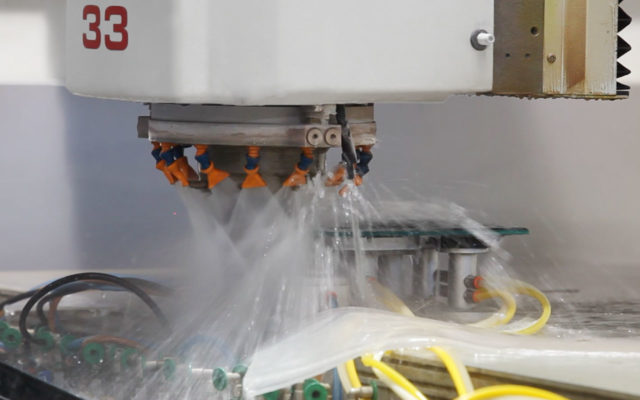 Today items of glass can be seen everywhere around you, be it homes, buildings, vehicles, or simple things such as cutlery or decoratives. As we know glass is very brittle in nature and isn’t exactly an element in itself. It requires expertise to mold glass into the shapes that we see around us.

In layman’s terms, glass fabrication is the manufacturing and assembly of glass parts to create products of visual and technological prowess. But did you know, glass fabrication needs a lot of tedious, expert, and experienced supervision and effort to reach the end result without causing much loss of raw material, making it a very difficult job that humans have now let the machines take over most of it.

Glass fabrication has quite a lot of steps and prerequisites that need to be adhered to in order to prevent unwanted losses.

Glass has one basic component i.e. “former”, this component has to be heated to a state where the properties change and the glass becomes viscous in nature. Silicon dioxide is the most common “former” found in glass.

Various other elements are added further down the lane of processes involved in glass fabrication. A stabilizer is added to the glass to prevent it from forming crystals or from dissolving and calcium oxide that is derived from limestone is the most commonly used stabilizer. All the dry ingredients are mixed and broken glass pieces( known as Cullet) are also added to assist in the mixture’s melting process.

The glass is then added into a bath of molten tin and is later on shaped into the desired shape then left to cool down. Annealing is the term given to this cooling process which has to follow strict evenness and there’s an equally scientific reason behind it.

Annealing is a must simply because if one part of the slab is hotter and doesn’t cool down at the same rate as the other parts, that area would be thicker than the rest, ruining the whole product. An unevenly Annealed piece of glass has a higher risk of cracking than the rest due to the irregularity in thickness.

Diving deeper into the fabrication of glass, the coloured glass that we see is not obtained by adding colour to the glass, but metallic oxide in extremely low quantities.

Added during the heating of the glass, various other elements give different colours and the quantity is directly proportionate to the colour, although manganese dioxide is one particular element that decolourizes coloured glass and if added more than the required amount also gives a purple hue to the glass.

Pulling you back from the world of glass colours, the next step that follows after cooling the glass is cutting. Cutting the glass is mainly the task of CNC(Computer Numerical Control) machines that are used worldwide by glass fabrication companies. These machines are preferred due to their extreme precision and quality results.

These machines are capable of performing various tasks on a piece of glass such as drilling holes or perfecting the edges and a lot more if we look closely.

Various distinct toolings help these machines achieve such precision and also help in reducing the chances of human error. These high-precision products are then polished further to create some of the most commonly flowing products in the glass fabrication world that include lenses and scopes used mostly in the scientific part of our world.

The step that comes after cutting is possibly the one step that carries a whole lot of scientific know-how, to understand the importance it carries. This step, which is termed as Tempering of the glass, is close to simply heating the glass but gets trickier right after that. The catch remains in the rate at which it is cooled and how exactly this process goes about.

The glass is put through a Tempering oven which heats it to about 600 degrees celsius before cooling it down using specialized nozzles that shoot high pressured air and that is where tempering retains its name and value.

A chemical tempering method also exists where the glass is immersed in a molten potassium salt bath where the larger potassium ions replace the smaller sodium ions in the glass filling the gaps and making the glass stronger. Although this process is more expensive than the traditional Tempering, it’s preferred by a lot around the world as it proves to be a bit faster than the previous way.

Laminating is another process of strengthening glass by either interlaying plastic or by joining two layers of glass. Laminating is usually done by applying heat and pressure to help with the bonding or the use of adhesives is also common. Adhesives such as polyvinyl butyral (PVB) or ethylene-vinyl acetate (EVA) are the most commonly used adhesive agents used for bonding the layers.

Swastik Industries has been the leading Borosilicate manufacturer towering over the rest and redefining glass with their impeccable products and state-of-the-art machinery that provide quality.

Swastik products have truly seen the globe and having perfected the art, they don’t stand down in delivering results.