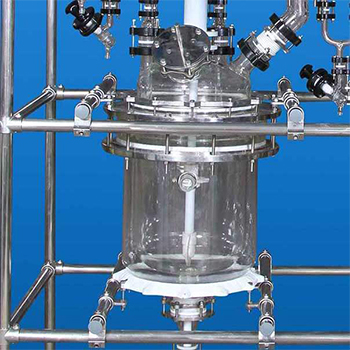 Made from highly corrosion resistant borosilicate glass, thin film evaporators lined with steel which enables them to have a smooth surface. They are also widely referred to as a wiped film evaporator and consist of two major assemblies, a heated cylindrical body and a rotor. The thin film evaporator is divided into multiple parts, all having different functionality and importance to the process. It has a feed from where the material is entered and it moves to the heating medium, where the material gets heated. This heated material is then moved along to the rotor where it gets evenly distributed and spirals down the wall, where the high speed of the rotor tip allows it to generate high turbulent flow.

This turbulent flow allows the thin film evaporators to create optimum heat influx and thus generate mass transfer conditions. Thin film evaporator’s high speed allows people to evaporate highly volatile conditions, making the generated vapors flow both with the current or counter current, which is not that big of a deal considering that the vapors created in both cases are used for condensing or for the subsequent processes. The non-volatile components are discharged from the outlet as they are not as useful. There is a lot of residue generated during this process, but the making of thin film evaporator is such that there is no trace left in the end.